Precious Friend, name so like mine, and I meet while we can – those sacred days after the cherished-with-family-time of  Christmas and before having to return to work, when time moves more slowly…..so we can linger long over lunch.

I look into her delicate blue eyes surrounded by gentle lines, reminders that she also has slipped past child rearing; and I hear her concerns for American Believers, swept way up into the thick deceitfulness of the culture. We don’t hear about sin and repentance anymore, she sighs. I know, I acknowledge. But they say they are Believers, yet……it’s okay to live together? They say they are Believers, but they are not getting along with their spouse, so the “d-word” is being tossed around like a tennis ball? As if that permanence of separation will solve their problems? Are folks really just saying the “Christian” word but really have no clue as to the covenant relationship that is required because that’s what God means on His end of the bargain?

This morning, the first of January, the first part of reading from the beginning, the Word and there, in the very beginning is the cry to beware of sin. “Sin is crouching at the door,” says the writer of the Holy Word, “and its desire is for you, but you must master it.” We talk about that. We say that it seems that divorce, affairs, questionable ethics, all seem to be accepted by Believers. I tell her that I had just that morning written a letter of encouragement to my church staff mentioning that scripture verse, saying, the enemy does not like what is going on at our church and he will work hard to bring us down. He would begin with the seemingly harmless things. Things that would go unnoticed at first. But slowly, undetected, those behaviors would grow and before long would become issues to be addressed and by then it would be too late. So, I would urge our Godly men and women, to keep the door open, when counseling a person of the opposite sex alone. Be accountable to one another. Lunch with one man and one woman doesn’t look too good – you know what I mean.

I read the geneology of Jesus this morning, I tell her over delicious lunch, and more delightful conversation at our now favorite rendezvous from our familiar neighborhoods. And I found grace throughout. Tamar, then Rahab, though a prostitute, my friend reminds us both, yet she was searching and found the Truth and became a Believer and Worshiper of God; and  Ruth, also a non-Jew; a Gentile, like us. I pause. I stare a long time at the polished wood table then look directly into her soul and quietly say,” but Friend (I softly say her name), I did not find one homosexual. Not one.” She sees me. She sighs. I know, she says. I don’t find a single homosexual named in the Word of God, I say more earnestly. She nods. She knows. God called it an abomination. She’s traveled that perilous road – the one where she said, in love, in the love forged deep in her soul by her Creator Savior, to one of her own, precious child, the road you are on is leading to sin – a deep separation from your Creator/Father. You need to look inside and repent. Turn completely, rethink and respond according to the Word and He will forgive you. Completely. Together we smile at one another’s glowing eyes. We know the story has a happy ending.

Oh, I don’t want to be a coward. I want to be brave for my Lord, she says, again, that earnestness in her tone. This year I want to be able to say out loud that the W ay, the Truth, the Life are in my Savior and Lord Jesus Christ. I want to say it in love. And I know, I tell her, that finally, the responses are not to me; they are to my Lord. He said He would be the stumbling block. Folks hate it when they hear things like “surrender,” “repent,” “live for the Lord, not for self.” Folks balk at anyone challenging them on their independence.   I sigh. Again. Friend, I say to her, looking directly at her intently, and pause. Why is it hard to say it? Because I’m checking on my own self. Am I able to say? How do I know if God and I are in right standing with one another at this very minute? Who am I to say? And then I say, “but if folks are not willing to put the Lord first in their life, then……..” and this was where I paused for more than a second…….”they really don’t love the Father deeply at all. Perhaps they weren’t His all along.”

She hands me a heavy something wrapped securely in tin foil. Your fudge for the year, she says, as we hug and  she hands me her Christmas gift. Keep it in the freezer and it will keep all year. Just eat one at a time. 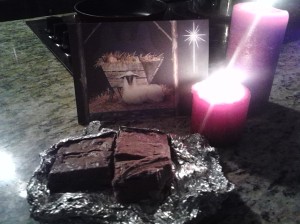 By the time I had gotten home  three were gone. Into my tummy. So utterly delicious and addicting!