It’s all Beejai’s fault. My all time favorite blogger of The River Walk has prompted me to write this response to his series  “Twenty-five songs of Christmas.” In Song #7 – “Angels We Have Heard on High” he talks about how he would prefer another word than “sweetly” to describe the angels’ singing. I agree. If, as the Scriptures indicate, the heavens were filled with the mighty angels proclaiming the birth of the Son of God, surely they wouldn’t be “sweetly” singing as if they were cooing a baby to sleep! They made some noise! Loud noise! They woke the shepherds up! They frightened them!

It does seem like we have sweetened up the whole Christmas story over the centuries with saccharine images and messages. We’ve watered down the story  to a comfortable, safe milk toast middle class America in the 50’s view.

After reading Beejai’s very well-written blog,  I picked up my all-time favorite Christmas story, The Best Christmas Pageant Ever by Barbara Robinson to freshen up my memory of how six street-smart kids learned of the Christmas Story and took it out of its starched stuffy church play and into believable characters!

Singer, song-writer and author, Michael Card said that there are stories in the Bible that should bother you. Bother in the sense of mystery, of not making any sense. It bothered the Herdman children that Joseph and Mary were led to the back of the inn to the barn to stay the night they arrived in Bethlehem, even though she was pregnant (as opposed to “great with child.”) And, they learned to their complete horror, that Mary had nothing to lay her new born baby in but a feed trough! “We laid Gladys in the bureau drawer ,” Imogene volunteered. It bothered them that the gifts the Wise Men brought were “not practical.” What is the baby going to do with oils? they had cried out in alarm. We get a ham every year from the fire department.

What makes this story so timeless to so many of us is that there truly are children all around us who have absolutely no idea what the real meaning of Christmas is. They see Santa Claus’s everywhere that they’re supposed to believe in, sitting right beside a plastic nativity scene with figurines all dressed in some centuries old costumes that have no meaning to them and some are told at church that they’re supposed to believe in them. Really? Why, they wonder. The Herdman’s had not been taken to church all their lives. They demanded that the  director of the Christmas play tell them the story. And so much of it bothered them. Did it bother the rest of the church children who had heard the story all their lives, that Mary had to lay her baby in a feed trough? Did they get that the Angel of the Lord, played by Gladys, broke through the pre-school angels from the back of the stage that night and hollered out, “Hey! Unto you a child is born?”

We who’ve been around awhile think we know the story and the way it’s supposed to be told as if it was a layout for Southern Living Magazine. Everything in its crisp,starched, perfect, most proper place. But not people friendly. Made to be a picture to just look at but not be moved by.  The Herdman children remind me to look at the story from a fresh “I never heard the story before” approach and consider that Jesus was indeed born for us. All of us. Into this very unfair, imperfect world to bring us His salvation from our own sins and to love us just as we are. I believe He came! I want to know the child who was born! Thank you, Barbara Robinson, for bringing the Herdman’s to life and to question what really happened that night so long ago. Hey! Unto YOU a child is born! 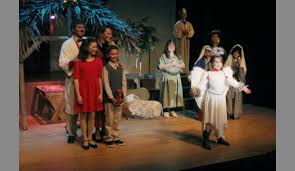