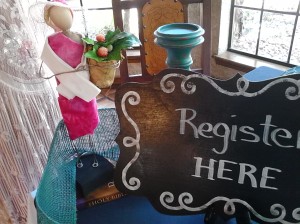 “Now to Him who is able to do far more abundantly beyond all that we ask or think, according to the power that works within us, to Him be the glory in the church and in Christ Jesus to all generations forever and ever. Amen.” Ephesians 3:20

A few years ago, I heard a friend give a talk about markers in your life’s journey which are events or people who have come along in your life and just “marked” it in your memory by making a change in your life so that you never forget that moment. It’s not necessarily a hard change as in the death of someone meaningful,though it could be. But it could also be the moment you got hired in what became a wonderful job, or your marriage, or the birth of your children. Markers usually come in our lives that make a distinction from one way of life to another in a way that we can look back and see exactly when our lives made that change and what was the event or the person that was the catalyst for that change.

Shortly into this retirement adventure I had a few hours in the day that I had not had in a very long time and so I found myself attending a Ladies Bible Study, and then offering to go up to the church to help put the women’s retreat folders together. Simple things. Not too much. I had been asked to help with registration at the retreat, to which I thought, that’s not hard. Sure. That would be fine.

I had not attended a women’s retreat in many years for various reasons, one being that I  was not mentally in a place to receive. The truth is that the retreat is not always the problem. I have been known to enter an event exhausted from having taught school all week, which put me not exactly in the right frame of mind to come to a place of “retreat” and hear from the Lord and have to be NICE to all the women. It was just too much.

But retirement slowed me down. Attending a wonderful Bible Study with fun new friends helped improve my attitude about this retreat immensely. In fact, truth be told, I was actually looking forward to attending, but only as a helper, I kept telling people, mostly myself. I’m not planning to get much out of this weekend, believe me, I thought. A bunch of women getting together feeling good and singing a bunch of songs and hearing some woman speak on how to read the Bible better and do the Christian life better. Please.

Okay. My attitude still needed a bit of refining. But working behind the scenes in getting the rooms ready helped melt my heart a bit. I was seeing the results of many hours of work from behind the scenes come forth in beautiful ways. The making of many precious dolls, signs, give – away gift bags, goodie bags for each room, snacks and drinks. I began to see that much labor had gone into making this retreat very special for those who came. Before the ladies began to come that Friday afternoon, several of us gathered to pray. And that was the beginning of the change. He was melting my heart to receive Him. He was changing my focus from past experiences to present expectation of what He was planning to do in my life.

That evening after the ladies had checked in, I found a seat next to one of the young ladies in my Wednesday Bible Study. She is a vivacious mom of two little girls and is  strikingly beautiful  in her early 30’s who just exudes love of life. As soon as I sat down and had not even taken a bite of salad, she asked how my son was doing. And before I could answer she mentioned that certain ADD drugs can be addicting. It was the very drug I had had my son on for nearly all the years he was in school. Twice he had overdosed on his meds, sending him to the hospital. In the meantime he began to drink to the point that he became addicted. I was melting. Please tell me more, I pleaded with her. We made a date to see one another after the retreat. But Jesus was already using her to prepare me for more. After our very brief conversation I texted my mother, “I believe my son can be healed.” And I did. I didn’t know how, but I believed.

On Saturday morning of the retreat, there was not one woman giving a pep talk on how to live the Christian life. There were several women throughout the morning and afternoon who gave their testimonies. I was there to hear one. She became my Marker, though both of us were totally unaware at the time. This lady of about my age got up and began talking about how she and her husband had raised their children in a good Christian environment, going to church, paying attention to their needs at school and so forth. They had no idea the road one of their children would take, and it was the road to self destruction. I was listening, as the tears just wouldn’t stop coursing down my cheeks. She told of her son who had gotten addicted to some powerful drugs and had ended up sleeping in his car. “One day,” she said, “in utter desperation I told my son, “If you don’t stop, you’re going to die.” Her voice was quivering. My heart was in knots. She’s telling my  son’s story, I cried to myself.

“Evidently,” she said, “that was what it took to get my son to listen. An officer who has known my son for years, as he serves as a security officer at our church on Sundays, went to his car and got him to a place to detox cold turkey then took him to a recovery house. But it was God who got his attention. My son returned back to the faith of his childhood and made a complete change of life. He has been sober for 3 months and has absolutely no desire to go back. It was God who intervened and changed the heart of my son. He now tells everyone he can about the love of Jesus and how He changed him for ever. He still lives at the recovery house and now has a job and is doing well. I have to totally give the Lord praise. It was absolutely nothing we did except pray continually for our son.” She sat down.

I was a total mess. I have no idea what anyone else said the rest of that day. I immediately got up and went to see the lady who had just spoken and asked her where her son was living. I wanted to get my son there, too. She gave me the name of the center. I thanked her and returned to my seat, trying to focus on those around me but found it impossible.

Over the next several months my son, who was living at a different center, was becoming more hostile to the things of God. I could tell from his conversations that he was being persuaded by those around him, folks also hostile and cynical to the ways of God and Christ centered living. I talked to him about it, prayed and eventually he agreed to leave and move to the other recovery center. It was difficult in the sense that he was not willing at first to move. Not long after he moved to the new recovery center, the speaker’s son began sharing with my son, telling him how he needed to get his relationship back with the Lord. One morning my son called to tell me he had made a commitment to the Lord and asked Him to forgive him. “I know Jesus is real, Mom. He has forgiven me.”

My son has been sober for over  sixteen months. His attitude toward spiritual things is totally changed. He still struggles with different issues but he knows his Savior. He knows God has him. And that truth makes getting up every morning a whole lot easier.

Why would I share such a personal story? Not too long ago, I found the folder that we all received at the women’s retreat. On the cover is the scripture Ephesians 3:20. He has made us to do abundantly more. God was at that women’s retreat in huge ways. Not every woman came away with an “aha” moment. Not every woman enjoyed the retreat. But He had me there to know that I was not alone in my struggle with my son. He wanted me to meet other women who had journeyed ahead of me in this hard part of child rearing and to know that He would make a way for my son to get back to a right relationship with Him. My son is off all medication since they were making him depressed and then suicidal and angry. He feels much better overall, and he is making every effort to work out some issues in his life such as work and living arrangements. Do I believe he is healed? He and I know that an alcoholic is never quite “healed.” But recovered and managing and staying in touch with a sponsor? Yes, to that end, he is healing. He is moving forward in his life and that is all because he knows His Lord is leading and taking good care of him.

On the other side of the story, the retreat was also the catalyst for a wake up call in my life. I was in total denial about my son. A month after the retreat, I was invited to attend an Alanon meeting for those who are related to an alcoholic. I went, truly wanting to understand what my son was going through and how to help him. I could not get my head wrapped around that. I was in such denial, yet, all the things he had done in the past few years pointed to this behavior. I just didn’t want to believe it. I faithfully attended for several months, even attending 2 meetings a week for awhile when they conducted a 6 week review of the 12 steps. It was at those meetings that I truly learned a lot about my son as well as about myself and my own involvement in his life related to his drinking. I began to wallow in some deep self pity over what a horrible mother I had been. Finally, I turned over the past to my Lord, who kept telling me He had forgiven me and to move on. I let it go. I cannot tell you what freedom is when you truly let. It. Go.

Come as a child. A child who is humble and teachable in heart. Then you can truly know His love for you as your Abba Father. Amen.

2 thoughts on ““Becoming More”……..the Marker that changed everything”